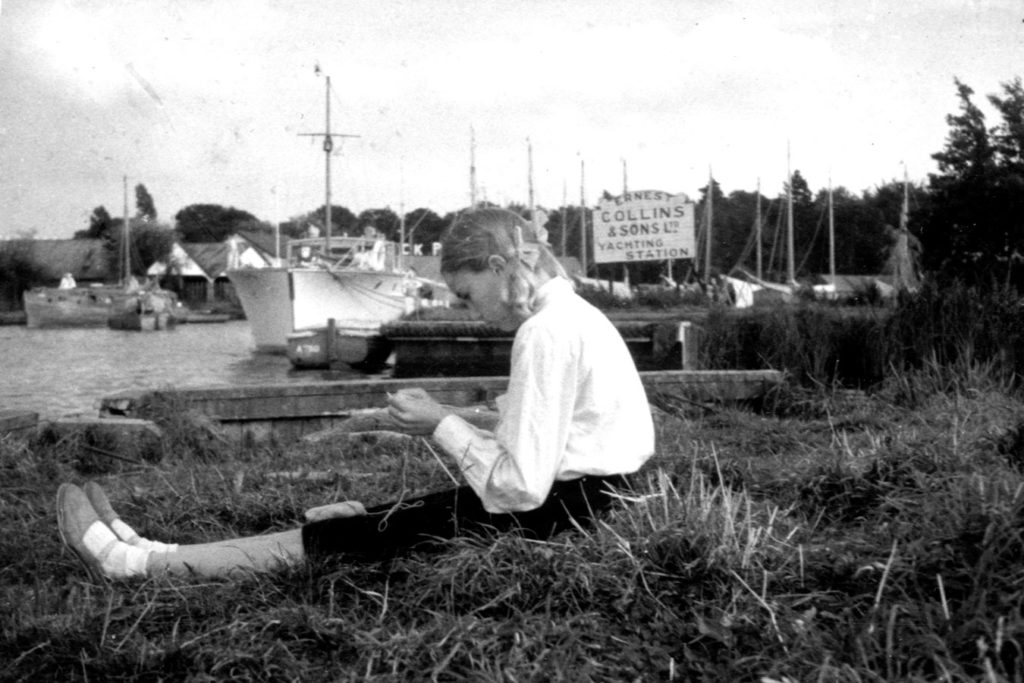 Pictured: Margaret knitting on the Wroxham bank at the entrance to Windboats’ dyke. [Photo: Cecil Perham 1956 or 1957]

Boating had none of the ease of today

Since 2009 Mrs Margaret Bird has moored the family boat, a Sheerline 950 named Penguin, in our basin by the service area. Margaret prefers it here as she can easily exchange greetings with us as we go about our day. Sometimes we get to hear boating stories from days gone by.

The Norfolk Broads has a certain charm that pulls people back to these waters time and again. “You’re your own master,” says Margaret Bird. “What attracts many people to the Broads is the freedom, the skies, the scenery. I particularly love the presence of the church towers; they’re so inspiring.”

Growing up, Margaret spent every holiday apart from Christmas on her parents’ boat, the 24-foot Cadet I built by Brooms in 1934. “I’ve never tired of it,” she explains. “Every day is different, and there is always so much to do and enjoy.”

When Margaret was first taken on Cadet at Broom Boats in 1947, aged six months, boating differed from today. She recalls a time when they had to collect drinking water from local wells. “Much of the day was spent getting food and water. We had to go to the farms for milk and carry it back to the boat in cans. There were no fridges, of course, so we had to do that every day, sometimes twice a day.”

The boat also didn’t have a sea toilet, so everything went out via a straight hole in the boat’s bottom. “We had a beautiful mahogany slab which we sat on for our toilet,” says Margaret. “I used to feed the fishes with breadcrumbs down the hole.”

It was a time of petrol rationing, so Margaret’s parents didn’t use electricity as they couldn’t go cruising to re-charge the batteries. They didn’t have Calor gas on board, and they used a primus stove and oil lamps.

Margaret’s earliest memories are of Clifford Allen’s yard at Coltishall, where her parents moored their boat from 1948. “As with all the boatyards, you had the feeling that you could walk anywhere and that you were welcome at any time,” says Margaret.

“There were beautiful oak planks stacked everywhere on risers (wedges between each plank). The yard was built on the site of an old maltings. I used to love exploring the inside of these very cool, thick-walled flint buildings.”

A feeling of kinship

One of the things that Margaret enjoys about boating on the Broads is the feeling of camaraderie wherever you are on the water. “The enthusiasts who go to the Broads tend to be lovely people, who share the same attitudes, outlook, and interests.”

She remembers the “wonderfully welcoming feeling” of being at Clifford Allen’s yard. “People from the village used to walk down to be by the river in the evenings when the men had gone home. The people of Coltishall had a real need to be by their river. That’s true, I think all over the Broads.”

Wherever Margaret and her family went, they talked with other boaters and made friends with the local people. “We would always help one another, which we still do today. It’s very apparent among the customers at Brooms.”

Over the years, Margaret and her family have explored all the hidden corners of the upper and lower reaches of the Broads. In terms of scenery, she says she loves the River Bure upstream of Belaugh right up to Horstead Mill and Coltishall Lock. She’s also fond of Limekiln Dyke off Barton Broad up to Neatishead and also nearby Irstead Staithe.

“I’m very fond of the River Yare where Brooms is,” she adds. “My favourite reaches are from Whitlingham down to Langley Dyke. You get almost every aspect of what the Norfolk Broads has in terms of scenery from that relatively short stretch.”

Due to petrol rationing Margaret only visited Broom Boats twice when growing up. “I only remember a little bit about going down south because I would have been three and four. I recall the anxiety of my father as we approached Great Yarmouth and Breydon. He didn’t use tidal wheels with the tide tables. He just calculated the timing of our passage to reach Yarmouth at slack water from the landmarks such as Seven Mile House, Five Mile House, Three Mile House and kept a close eye on his watch.”

A new era at Broom

Margaret didn’t revisit Broom Boats until 1972, when she went with her husband Tony on the Cadet from her childhood. “It was lovely to show her off to Basil Broom because he’d sold her to my father from the hire fleet 35 years earlier.”

Margaret and Tony and their sons now keep Penguin in our service basin away from the marina’s hustle and bustle. “We love it there. We like to be where the men are. The workforce is everything at Brooms. They are absolutely stunning, second to none.”

Margaret has been incredibly supportive of Broom Boats over the years. We’re delighted that she approves of the changes we’ve made around the yard. “Brooms looks brilliant with all the signwriting, the otters and herons. Brooms has always pulled out every stop if we’ve had a problem, and to have that level of service is unbelievable.”